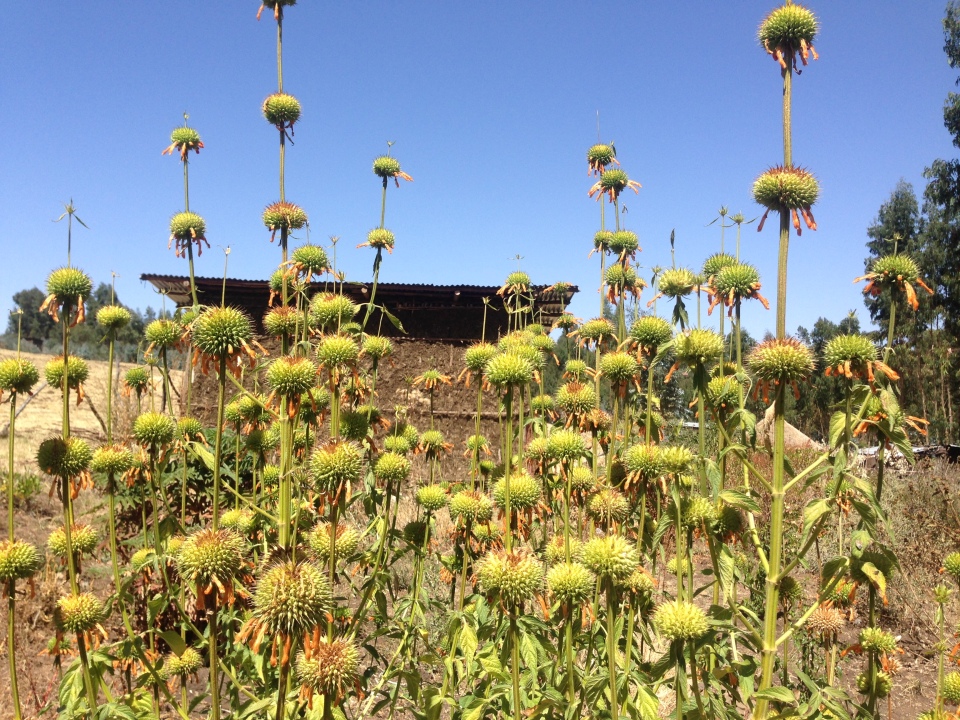 Artemisia abyssinica or Chikugn (Amharic) is a species of wormwood that is traditionally used for intestinal problems, for infectious diseases, and is anti-leishmanial (acts against Leishmania parasites).  The whole herb can be used to address tonsillitis, and an infusion is traditionally drunk as a remedy for colds, and sickness in children.

Used to treat coughs and colds, the fresh leaves are squeezed and the juice sniffed. The juice can also be used as an eye rinse for eye infection.  Also used for mich, an infection of fever with headache and mouth blisters. 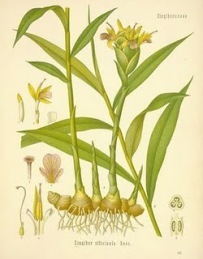 The rhizome (root) of ginger is popularly used in Ethiopia for stomachache and respiratory problems. It is chewed or masticated with ‘feto’ (Lepidium sativum) for stomach disorders.

It is also popularly used for its carminative (relieves gas ) and anti-nausea activities.

Ginger is equally popular in western herbal medicine and there has been extensive investigation of the rhizome and its constituents.  Zingiber officinale has demonstrated anti-inflammatory effects, as well as anti-platelet, antioxidant, antitumour, antirhinoviral and antihepatoxic activities (preventing damage to the liver) (Wohlmuth, 1999).

Gall, A. and Shenkute, Z., 2009. Ethiopian traditional and herbal medications and their interactions with conventional drugs. 16th March 2010 http://ethnomed.org/clinical/pharmacy/ethiopian-herb-drug-interactions

Known to be used for coughs and asthma, as a narcotic and an anti-epileptic in Ethiopia.  Research notes other traditional uses for headache (as a dressing), paludism (malaria), ague, fever, stomachache and as a diuretic.  The smoke of the burning root is commonly inhaled for ‘Satan beshita’ or ‘devil disease’ (Asres 2001).

Withania or Gisewa is also found to have antifertility properties and to be traditionally used as a vaginal douche (aqueous extract) for its uterotonic and anti-implantation activity on butanol fraction extract (Desta, 1994).

Western herbalists are familiar with Withania (Ashwaganda), and it is used as tonic. In Western herbal medicine, decoction or extract made from the root  is a popular remedy from the ayurvedic tradition, as an ‘adaptogen’ remedy and for the treatment of debility and nervous exhaustion, for convalescence and as a general tonic (Mills and Bone, 2000).

Endemic to Ethiopia, Echinops kebericho, is used for fever and as a taenicidal herb (to expell tapeworm).

The smoke from burning the plant is inhaled to relieve headache and also as a cure for “evil eye” (possession by evil spirits in Ethiopian folk religion).

The root is burned for smoke to ward off mosquitoes and as a snake repellant in the house.  The smoke is inhaled to fight  typhus and fever, and is known to be used as a fumigant, mainly after childbirth. The root is also chewed to alleviate stomach ache.

Demissew, S., 1993. Description of some essential oil bearing plants in Ethiopia and their indigenous uses. Journal of Essential Oil Research 5, 465-479.

Teklehaymanot, T., Giday, M., Medhin, G. and Mekonnen, Y., 2007. Knowledge and use of medicinal plants by people around Debre Libanos monastery in Ethiopia. Journal of Ethnopharmacology 111, 271-283.

In Ethiopian traditional practice, the roots of Verbena or Atuch, are soaked in water and drunk to expel roundworm, help with snake bite, and relieve stomach ache and diarhoea.

A ‘herb of all trades’, Verbena is found to have antimicrobial properties and is traditionally used for treating tropical ulcers.

Mixed with olive oil, the juice of the fruit is used as ear drops and a juice made by crushing the fresh leaves, filtering and mixing with honey, is also used to alleviate dry cough in Ethiopia.

In Ethiopia, the boiled or roasted roots of Ensilal or Fennel are traditionally used to treat gonorrohoea, digestive disorders and infant colic.

The juice of the fresh or dried leaves is used to stem nosebleeds and the plant is also known for its anti-fertility properties. Studies record the traditional use of an oral application of the fresh Fennel leaf as an antifertility remedy (Desta, 1995).

Western herbalists are familiar with the use of Fennel seed as a carminative and digestive; and evidence from randomized, double-blind, placebo controlled trials suggest that Fennel is effective in reducing infantile colic (Natural Standard, 2010).  Clinical trials also support the use of Fennel in combination with other herbs for dyspeptic conditions of the upper GIT, including pain, nausea, belching and heartburn; chronic non-specific colitis, diarrhoea or constipation. 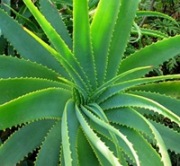 Aloe vera, or Eret in Amharic, is known for its cooling and cathartic properties. It is used in Ethiopia for fever, spleen and liver troubles, as well as ‘knee troubles in old age’ and ‘eye treatment’.

The juice of the plant would  be used on the breast of nursing mothers to assist with weaning as its bitter taste would discourage the baby from suckling.  The juice of the leaf  is also known to be given to a mother  in childbirth to ease labour.

In western medicine, the fresh juice of the Aloe vera plant is used as a topical application to cool burns, and the juice is taken orally for digestive disturbance. 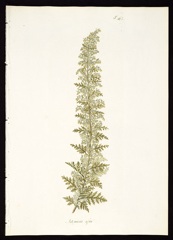 Called Ariti in Ethiopia (Amhar), the juice of the crushed leaves of this plant is mixed with water or honey and administered orally to address stomach pain in Ethiopian traditional medicine practice.

The essential oil of Artemisia Afra has antimicrobial properties. In South Africa, it is one of the most popular and commonly used herbal medicines for treating various ailments; from coughs and colds to malaria and diabetes.

This site uses Akismet to reduce spam. Learn how your comment data is processed.

Botanica Ethiopia is proud to be a partner for project J655N with Global Development Group, an Australian DFAT approved NGO carrying out quality humanitarian aid and development projects with approved partners to relieve and provide long term solutions to poverty.